There’s a photoshopped picture of Adele that’s gone viral recently, and it has caused many people to exclaim “WTF!” It involves the cover of her recent album being turned upside down, but her mouth and eyes remain in their normal position. Nothing too weird there, right? The reason that it’s gone viral though is what happens when that photo is turned upside down. The odd image is an example of what is known as The Thatcher Effect, which deals with why people have a hard time digesting upside down faces.  As per Wikipedia “This is thought to be due to specific psychological cognitive modules involved in face perception which are tuned especially to upright faces. Faces seem unique despite the fact that they are very similar. It has been hypothesized that we develop specific processes to differentiate between faces that rely as much on the configuration (the structural relationship between individual features on the face) as the details of individual face features, such as the eyes, nose and mouth.”

It’s named after Margaret Thatcher, whose face was first used in such a manner in 1980 by a Psychology Professor in 1980. There are many other examples out there as well. Thought it was impossible to make Angelina Jolie ugly? 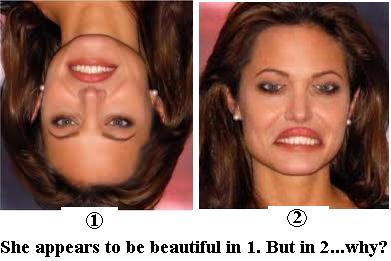 I should point out there are many differences between Adele and Margaret Thatcher. Thatcher was among the most polarizing political figures of the 20th century and was hated by many. On the other hand, everyone loves Adele – much like cookies, the beach or Morgan Freeman, it’s pretty much hard to dislike her.