By now, you may very well have heard of the #BLMKidnapping case in Chicago, though no thanks to the mainstream media.

If you still haven’t, here’s the story in brief: four young black people kidnapped a young white man with mental disability. They kept him for almost two days. They tied up the terrified young man, beat him, shouted insults at him (including “Fuck Donald Trump” and “Fuck White People”), burned his skin with cigarettes, hung him, told him they were going to kill him, spat on him, scalped him with a knife, and eventually threw him out onto the frozen Chicago-winter street in only his underwear. The whole time they posted messages to the boy’s parents, mocking them and threatening their disabled son.

They videotaped themselves in the acts and, apparently feeling somehow sufficiently justified in their atrocities to be safe from any prosecution, posted the video onto their own social media.

An incomplete portion of the video can, as of this writing, be seen here; for however long it lasts (Youtube has been systematically banning the video everywhere it could, it seems they don’t want people to have a chance to see what really happened)

If the video is already gone by the time you read this article, try to search Youtube for “BLMKidnapping”. There have been mass-postings of the video in an attempt to get it out there faster than Youtube can conceal it.

It’s not just Youtube, of course. All the mainstream media is doing all it can to downplay the incident. Twitter, which has a long history of left-wing bias (and apparently, hiding vicious assaults on mentally disabled white men is now part of “left-wing bias”), is intentionally removing the “#BLMKidnapping” hashtag.

Hey Twitter, changing the hashtag to #blmkiddnaping won’t hide the fact that an anti-White hate crime was committed.

I want to show you a tweet by Brittany Herring, who was the apparent ringleader of the attack on the disabled man, where she lets you see what she thinks of the USA:

(tweet courtesy of @GopAaron, who you’ll note is young and black, and yet utterly outraged with this attack, just like any other normal human being would be, and like I’m sure most black people who aren’t ideologically-motivated BLM fanatics must be)

But note that Brittany wasn’t the one posing for that picture, she was just re-tweeting it.  That’s not her wiping her ass with the American flag, that’s a very well-known BLM-related activist named Sierra McGrone.  McGrone has gained fame by shitting on American flags in exchange for donations for her activist cause, while calling for the lynching of cops.

This is important to note because it makes it clear that Brittany Herring is politically active.  What she and her friends did to that young man was not just random apolitical violence, or even politically ignorant violence. She isn’t just an amateur if she’s reposting images of flag-defecator Sierra McGrone.  She’s clearly very politically educated in the BLM movement’s material.

In the end, the Police did eventually charge all four of these monsters with Hate Crime charges.  But at first they had planned not to, until a massive outcry and the threat of public exposure by right-wing media channels basically forced them to.

If the story had been buried -like it would have been were it not for the intervention of all the ‘deplorable fake news’ conservative media- the plan was for all this to be treated as just a “prank”, and for the perpetrators to get off with a slap on the wrist.  Check out how the Chicago Police Superintendent initially didn’t want to call it a hate crime, and actually claimed it was a ‘stupid kid stuff’:

I’m sure Police would have said exactly the same thing, if the situation was reversed, and the ‘pranksters’ were four White 18 year olds and the victim who was kidnapped, tortured, hung, and scalped was a mentally disabled Black person, right? I’m sure it would just be ‘stupid kid stuff’ then too, right??

Of course not! If the colors of the people involved were reversed, the entire country’s media, politicians, and activists would be collectively going totally apeshit.

Superintendent Johnson would have claimed the perpetrators were White Supremacists, and would state that he would throw the book at these horrible racially-motivated monsters.  BLM would be calling for riots. And the media would be covering this story non-stop for the next 72 hours, producing endless think-pieces about “the problem with white people” and how to stop white-racism, and more videos like the one Lena Dunham made just before her side lost the election, about how ‘Straight White Males need to go Extinct’.

But since it was four black people attacking a disabled white male, the left-wing mainstream news channels have barely touched on the subject. And when they have, they’ve done everything in their power to play down what really happened, because it doesn’t fit their narrative.

The Associated Press went so far as to make their headline read “four suspects in custody after video posted online shows people beating a man”.

You know, that’s TECHNICALLY not a lie. But it’s pretty much as far away as you can get from any of the truth about what’s happened, without just lying about it. It represents a stunning dedication to weasel-wording your way out of saying “four black people kidnapped a white guy and tortured him”.  That much effort could only happen if you’re desperately trying to hide something that doesn’t suit your political agenda for the world.

Online left-wing news sites did much the same. Consider the Huffington Post, which actually tried to claim that it was only ‘alleged’ that these four thugs had tortured the young disabled man, even while admitting it was all posted on video!

Thought Catalog, who only ever  give me ‘thoughts’ about how anyone could possibly believe their crap, wanted to claim that if Trump supporters call out Trump’s name while “committing a hate crime” (something that happens way less often than anti-Trump people FAKING hate crimes), then somehow Trump is directly to blame for it. But if a group of ‘woke’ Black youths with a history of posting BLM-inspired political activism brutalize a mentally disabled white person while shouting “fuck Trump”, somehow BLM has no blame at all for the incident. In spite of spending the past year justifying violent attacks, vandalism, and assaults.

What do we expect when BLM has on multiple occasions had its people shout chants calling for the killing of cops, at its own rallies?

Whenever there is a tragedy, like now, they play this shell-game of claiming that the person who did it “wasn’t part of their organization”, but that’s because their official organization is really tiny.  And yet they clearly have people who are part of the Black Lives Matter MOVEMENT, who are totally with them without having an official BLM membership, who have engaged in or supported brutal violence.  The BLM organization is a political lobbying group, while the BLM movement is a terrorist radical group.  And the lobby-group side loves to count all those people who aren’t technically members as part of their numbers when it comes to exerting pressure for their agenda, but as soon as one of them actually attacks a disabled white guy or kills a cop or commits some other hate-crime, BLM conveniently pretends that they Don’t Know That Guy.

Shaun King, who I will affectionately refer to as “Talcum X”, is one of the BLM leaders; and he quickly posted that the worst thing about this attack was that it was unfair how BLM was being blamed for it. Then he went on to post this:

In his article, King claimed that there was no need for BLM to denounce the perpetrators because they were already arrested (huh?), and because anyways a whole bunch of black people have not had justice over the years.

Now, you’d think Talcum-X would be especially concerned about the kidnapping and torture of white people, given the secret everyone now knows but no one on the left wants to talk about: Shaun King is White.

(that’s a very white little Shaun with his mom and brother, on mom’s lap)

Seriously, why does this ass get to keep getting away with it while poor Rachel Dolezal got pilloried for being a white person pretending to be a black activist?

It makes his claim in his article about having been brutally beaten by “a racist mob of young white men” when he was a teen, a claim he’s repeated before, particularly curious. He claimed that he missed 18 months of school and had three spinal surgeries!

But investigations into this incident reveal that the police report seems to show that the only fight King got into was a one-on-one fight, not with a mob. And it wasn’t a “racially motivated hate crime”, it was because Shaun had threatened the other guy’s girlfriend over $8 he claimed she owed him (what a great future feminist there!).  And he only had minor injuries, no spinal-surgery incapacitating beatings to be found. And to top it all off, note that the police report marked teen brawler Shaun King’s race as WHITE.

Fake people like Talcum-X make up fake stories for mainstream media to report as fake news. And in that way, they fake a lack of responsibility for a REAL and brutal hate crime.

We live in an age where establishment media can state that Donald Trump is to blame for a hijab-pulling attack EVEN if it was proven to have never happened, but BLM is free of any responsibility for a group of black teens doing exactly the kind of race-based violence that has often been advocated for in their marches and meetings.

Or one where the media expects you to believe that a cartoon frog like Pepe/Kek is, by his very existence, a vicious hate crime that must be stopped. But saying ‘fuck white people’ while you scalp someone is not. 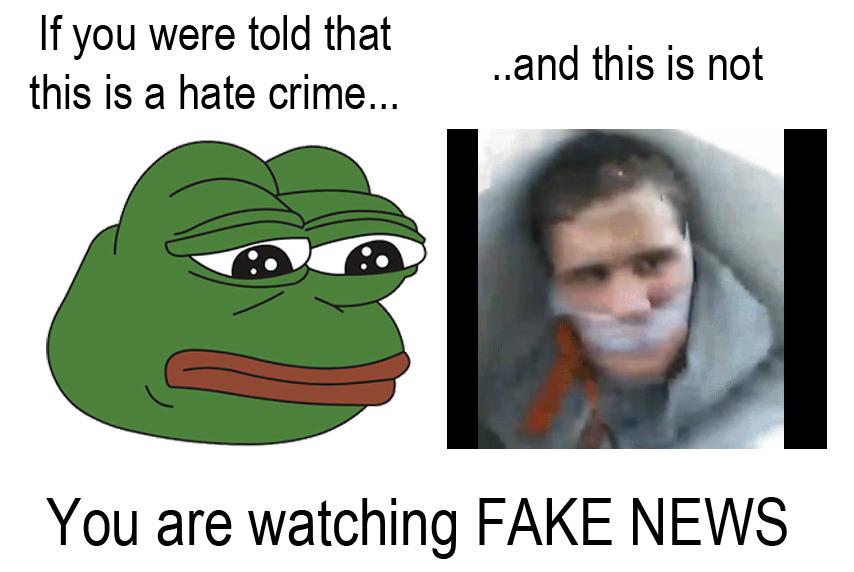